During a year defined by a global pandemic and civil unrest, Chicago-area theater was marked by anxiety, resilience and the recognition that when it comes to equity and inclusion on city and suburban stages, artists and organizations have more work to do.

2020 commenced on a bittersweet note with the departure of “Hamilton,” which exited Chicago in January after more than three years and 1,300 performances. Ten weeks later, the COVID-19 pandemic forced theaters to close — some permanently — leaving writers, actors, designers, directors, front-of-house staff and administrators without jobs.

But this vibrant artistic scene can’t be stifled. In the suburbs, Oak Brook’s First Folio streamed its Joseph Jefferson Award-winning 2013 premiere of “Cymbeline: A Folk Tale With Music” and scenes from its original production of “The Madness of Edgar Allan Poe: A Love Story.”

Following public health protocols, Oil Lamp Theater filmed a revival of Theresa Rebeck’s one-woman comedy “Bad Dates” in its near-empty Glenview theater and then premiered the production at a drive-in screening before making it available online.

Chicago theaters also pivoted to the digital format. Theater Wit filmed a performance of “Teenage Dick,” a “Richard III” redux in production at the time of the shutdown and made it available online. Timeline, Goodman, Sideshow and other theaters did the same.

The pandemic stoked the creativity of nimble storefront ensembles such as Black Button Eyes, which debuted its digitally re-imagined original production of “The Masque of the Red Death” by Edgar Allan Poe within weeks of the shutdown. Manual Cinema, The Neo-Futurists, Otherworld Theatre Company, Theatre Y and Trap Door were among the plucky ensembles who opted to produce shows online.

Strawdog Theatre presented the U.S. digital premiere of Titas Halder’s one-man show “Run the Beast Down” as the first full-length production of its all-digital season. Hell in a Handbag Productions transferred its popular “Golden Girls” parody to Zoom while Invictus Theatre Company livestreamed its revival of Marsha Norman’s wrenching two-hander “‘night, Mother” from the actresses’ homes, 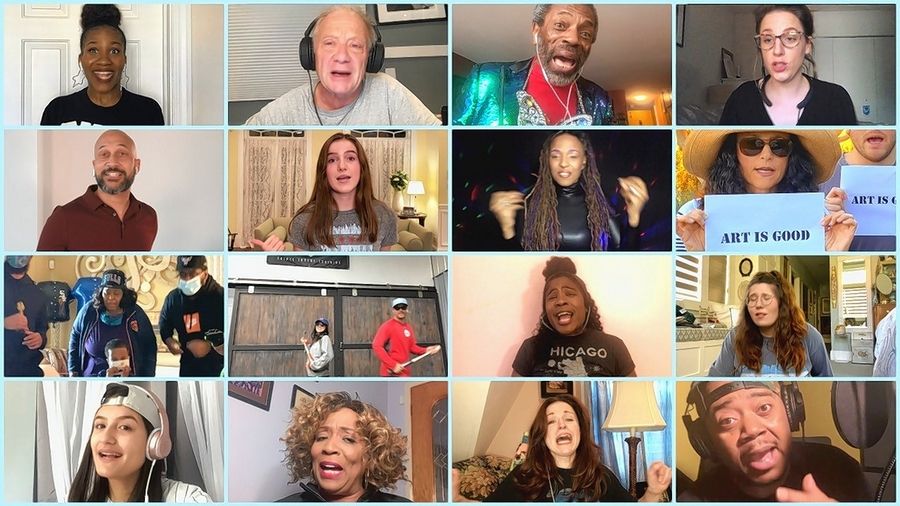 Last summer, Chicago-area musicians, dancers and theater artists teamed up for a video version of “Sweet Home Chicago” to raise money for the Arts for Illinois Relief Fund.
–

In recognition of COVID-19’s devastating economic impact, theater companies offered online content for free or at reduced prices, while encouraging viewers to make donations or pay what they could. Nearly 90 theaters promoted sales of the “Chicago Acts Together” T-shirt, whose proceeds benefited the Chicago Theatre Workers Relief Fund. The Arts For Illinois Relief Fund, established by the city of Chicago and the state of Illinois, made grants ranging from $6,000 to $30,000 available to individual artists and not-for-profit arts and cultural organizations. More than 70 current and former Chicago theater artists, dancers and musicians — including Jim Belushi, Kurt Elling, Jessie Mueller, Rachel Barton Pine, Ramsey Lewis, Rhymefest, Julia Louis-Dreyfus, E. Faye Butler, Jim Peterik and Joe Mantegna — teamed up for a “Sweet Home Chicago” video to raise money for out-of-work artists.

The coronavirus wasn’t the only crisis impacting the arts community. After the deaths of Black men and women at the hands of police officers sparked nationwide protests against systemic racism, Chicago and suburban theaters issued statements supporting Black Lives Matter and pledging to promote diversity.

In response, some ensembles named people of color to top leadership positions. Others established artist development programs for members of marginalized communities.

Among the most prominent efforts are those of 300-plus theater makers — a coalition that includes such luminaries as Sterling K. Brown, Viola Davis, Danai Gurira, Tarell Alvin McCraney, Lin-Manuel Miranda and Lynn Nottage among others — who signed an online petition titled “We See You, White American Theater.” Among the demands included in the petition are that Black, Indigenous and people of color comprise the majority of leadership positions in a theater company; that BIPOC plays make up at least 50% of the main stage season; that 50% of Broadway theaters be renamed in honor of BIPOC artists and that newspapers should eliminate salaried critics and feature writers and instead “invest in contract-based positions that are filled with at least 50% BIPOC writers.”

Whether theaters meet their demands remains to be seen. One thing is certain, what follows will be unlike what came before.

• Moving on. Music Theater Works, founded 40 years ago in Evanston as Light Opera Works, announced it will relocate to the North Shore Center for the Performing Arts in Skokie. The owners of The Second City — where comedy greats Tina Fey, Catherine O’Hara, Bill Murray, John Belushi and Dan Aykroyd honed their skills — announced they were putting the venue up for sale. That wasn’t the only challenge Second City faced this year. Charges of institutional racism forced the resignation of co-owner and CEO Andrew Alexander.

• Hail and farewell. The financial fallout from the COVID-19 pandemic forced the closure of Mercury Theater Chicago, which reopened in 2011 under executive director L. Walter Stearns. Last month Stearns received a Joseph Jefferson Award for his direction of “Monty Python’s Spamalot,” which was also named best mid-size musical.

Brown Paper Box Co. announced this year’s 10th season would be its last. Co-founder M. William Panek said the decision was made before the pandemic-mandated shutdown. In June, iO Chicago owner Charna Halpern announced on social media the theater’s closing citing the financial losses incurred by the shutdown along with a property tax bill she was unable to pay. Charges of institutional racism dogged iO, prompting performers of color to create an online petition demanding decentralization of decision-making and the appointment of a diversity and inclusion coordinator. • Brian Dennehy, a Goodman Theatre artistic associate whose 30-year collaboration with artistic director Robert Falls earned acclaim for both of them, died of natural causes in April. He was 81. A towering figure in the world of theater who was renowned for his interpretations of Eugene O’Neill’s plays, Dennehy was embraced by Chicago as a native son.

His stage triumphs included Tony Award-winning turns as James Tyrone in O’Neill’s “Long Day’s Journey into Night” (2003) and Willy Loman in Arthur Miller’s “Death of a Salesman” (1999, for which he also earned a Joseph Jefferson Award), both of which originated at the Goodman under Falls.

The longtime friends last worked together on the Brooklyn Academy of Music’s 2015 remount of Goodman’s 2012 revival of O’Neill’s “The Iceman Cometh.”

“Through a career that spanned more than four decades, Brian Dennehy’s towering presence, genial humanity and emotional explosiveness made him one of the most iconic actors of our era,” said Falls in a prepared statement.

• Last but not least, Arlington Heights’ Metropolis Performing Arts Centre last summer installed a new 9-foot, classic style marquee above the Campbell Street entrance. While the Metropolis stage remains dark, hoisting the marquee is an expression of optimism, a promise that live theater will return one day.

These Will Be the Greatest Overall health Developments of 2021

Fri Dec 25 , 2020
All over this time final calendar year, in preserving with recent custom, we arrived at out to our community of health and fitness and conditioning industry experts to forecast some industry traits for 2020. It was December 2019, just as the initial documented circumstances of a new respiratory health issues were […]